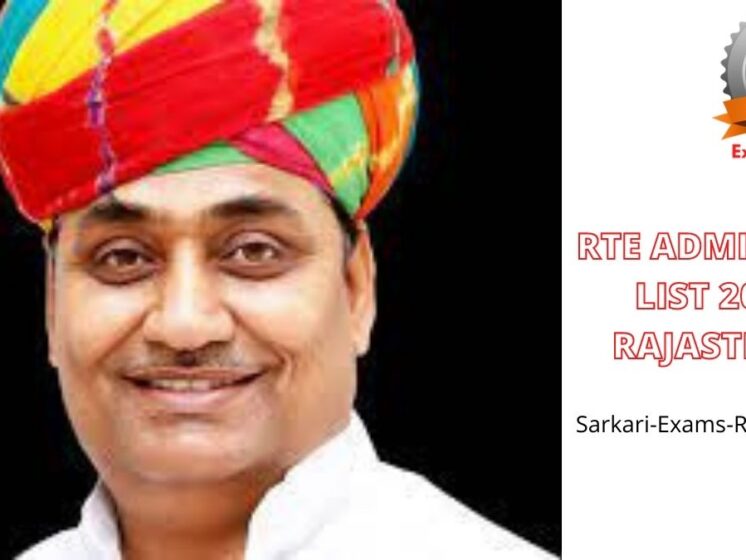 One can get copy of RTE Admission List 2021 Rajasthan as State Education Minister Of rajasthan has released out lottery. This list has a provision for free admission of poor students in private schools under RTE Act 2009. At least
1 lakh 11 thousand students will be able to take free education in private schools.

In State Capital of Rajasthan, On 27 October 2021 the Education Minister Shri Govind Singh Dotasara took out lottery for free admission of economically weaker students in non-government schools under Right to Free and Compulsory Education Act 2009.

The Education Minister said that the department is constantly making efforts to ensure the implementation of this Act with the thought of providing good environment, schools and teachers to poor students of all categories like Dalit, Tribal, Minority, General, Backward etc.

What Govind Dotasra Said During This RTE Admission List Release

Referring to the achievements made by the Education Department in the last two and a half years, the Minister of State for Education said that while the education of students was saved from being blocked by educational innovations during the Corona period, which was praised at the national level, many recruitments were taken out.

And after clearing the pending recruitment cases in the court, unemployed were given employment and teachers were provided to the students.

Shri Dotasara informed that the result of the recently concluded REET exam is expected to come in next one to one and a half months and 29000 new recruitments will be made soon by the department in which the State Staff Selection Commission will be made the nodal agency for the recruitment of more than ten thousand computer instructors.

It has been issued and the release will be issued soon. In order to provide proper guidance to the students, Rajiv Gandhi Career Portal has been created on which lakhs of students are benefiting from the information about various educational programmes, entrance examinations and scholarships. Shri Dotasara said that due to the hard work of the teachers and officers, the state is continuously making new achievements in the field of education.

The Education Minister said that the process of grading will be started on the basis of quality level of education in private and government schools, which will help the parents to choose the right school for admission of their children and targeted efforts can be made to increase the level of education.

Shri Dotasara said that it is proposed to give government recognition to the teachers organizations of the state by girdawari so that these organizations can do their work more effectively. Responding to the question of the journalists, Additional Chief Secretary, Education Department, Shri Pawan Kumar Goel said that the decision to run the schools at full capacity would be taken by a competent committee after analyzing all the aspects.

So this was the article that posted for poor students and benefits of RTE Admissions in Rajasthan. Kindly keep checking latest educational updates on Sarkari Exams and results website.